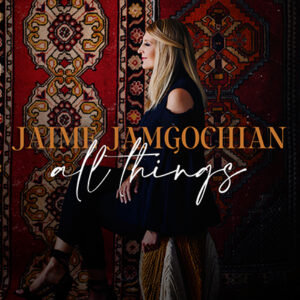 Nashville, TN (September 8, 2020)
New Day Christian Distributors is excited to welcome Contemporary Christian music artist, Jaime Jamgochian to its roster of exclusively distributed artists and labels. Jamgochian’s first single “All Things For My Good” debuted on Friday from her forthcoming album All Things set to release on October 2, 2020.

“I’ve been a huge fan of Jaime’s since the first time I saw her at a label showcase in 2004,” says Dusty Wells, Director of Label Relations for NDC. “It’s exciting to be able to work with someone who’s heart is in the right place: pointing people to Christ through worship. This new project for Jaime does just that, and New Day gets to take it to the Christian marketplace for both physical and digital formats. I now get to call her a friend, and personally am thrilled to be working alongside her.”

The Boston native found Jesus while studying at Berklee College of Music when she was 21 years of age. Jamgochian led worship at a Seattle-based church for several years following her tenure at Berklee where she signed her first record deal. Since then, the worship singer has moved to Nashville and continues to travel the world sharing the gospel.

“I am so excited for this new season of music,” says Jamgochian. “After overcoming some major health challenges last year, I wasn’t sure if recording music was in the cards for me ever again. But God is so good, and I pray that this album speaks to the hearts and souls of many.”

Jamgochian has also teamed up with Artist Resource Services, a subsidiary of NDC, to fulfill marketing efforts for her upcoming album, All Things.

Along with her distribution agreement, Jamgochian also signed a publishing deal with Curb/Word Publishing and business management agreement with Watershed Music Group.